I’ve already picked a word for W or I might have had wandered. Instead I’ll meander here. As I’ve wandered along the AtoZ I’ve been meandering about. With meaning. If someone’s commented on mine, I’ve replied to their comment then gone to visit them, caught up with old posts I missed and commented where I was able to. There’s been a few I gave up on. I don’t have all day to comment you know and hope you were able to comment easily on mine. Many apologies if not.

Then I’ve gone to the AtoZ list and picked a spot I’ve not been to before and with a bit of thought plus randomness I’ve meandered around more AtoZers sometimes popping in on those that have left fun comments too.

Struggling with the sketch for this one. I drafted one I’m not happy with so am going to put a random image in here.  Like my blog strapline, random, eclectic see how my mind works. Ooh One which could be sort of linked.. It’s an old sketch but I hope you like it if you haven’t seen it before. We’re half way through and I hope I’m not chicken enough that I won’t compete and if you’re meandering along a market I hope you *bump* into the girl/boy rather than chicken out. 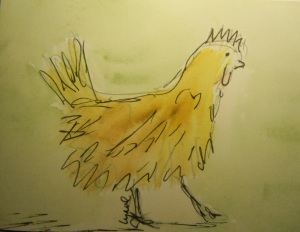 As he walked through the market stalls he saw her doing the same in front of him. Taking his time, he plotted out the route he would take which would coincide with hers as an appropriate stall ahead.

What can I say. I’m a hopeless romantic. Sorry. I don’t think I’ll change and I can’t help myself. Good thing I want to write romantic comedies. Shame they keep turning into standard family stories with a bit of mystique about them.

Linked to thoughts of emotions and behaviours, my theme is ‘I feel….’. Writers among you will be familiar with the phrase show don’t tell, for others it’s what every novelist tries to do. Authors want to show you the emotion and behaviour without telling you it. Trying to practice showing not telling, I have included an example in each post. I may have got it right, I may not have. Please let me know.

Here’s who else is doing the AtoZblogging challenge.